After fixing some bugs introduced in the last version, I got a little side-tracked with adding the long-awaited 'Complain' action at the stocks in Slaver Alley. Although I initially intended it to be a simple affair in which you could get locked up in a repeatable stocks sex scene, I ended up getting carried away and added quite a few scenes as well as a new unique NPC.

Due to this, I ran out of time in which to work on Helena's romance quest and the size-difference content, but I'm planning on getting that added for an updated preview version, v0.3.6.8, which I hope to have released by Sunday. After that, I'll add the Enforcer encounter scenes for the public release, which I'm currently expecting to be out around the 7th of February.

There are also still quite a few bugs that I need to get fixed from v0.3.6, but none of them (that I'm aware of) are game-breaking. In any case, the vast majority of them will be sorted out for v0.3.6.8. I'll also make sure that I've filled in the placeholders for at least Vengar's and Murk's content in the Gambling den (after completing Axel's quest).

Sorry once again for how this version has rolled over past my expected release date. I'll do my best to keep v0.3.6.8 and v0.3.7 on schedule!

I package and release these in-between preview builds for backers over on my SubscribeStar, but anyone can play them at any time by building them directly from the public github (which is always kept up to date with the very latest version): https://github.com/Innoxia/liliths-throne-public/tree/dev
(There's a build tutorial here.)

ALSO IMPORTANT: Make sure you build from 'dev' branch, as 'master' won't be updated until the v0.3.7 release.

v0.3.6.1 Update: A hotfix was released very shortly after this post was made in order to address a couple of major game-breaking issues. The patch notes and download links have been updated below.

I've got the vast majority of Axel's quest content added now, but it's still got placeholders for the loss routes and the post-quest Vengar/Murk interactions. As you've no doubt already noticed, I've really struggled with getting this quest content designed, coded, and written. I've learned my lesson, and won't attempt to add such a relatively complex quest all in one go again. I've particularly found it hard to design/write the more 'non-con' aspects of this quest, so I now know in future to keep them a lot simpler when adding those sorts of scenes (or at the very least, add them in smaller stages).

I will be adding the dialogue for the loss routes over the next few versions, but I've already spent so much time on this quest that I'm going to have to move on and primarily focus on other things. Speaking of which, for the next release, I'll be focusing on getting Helena's romance content added, as well as some Enforcer encounters and size-difference mechanics/content.

I'm sorry once again for how long this Axel quest has taken me to get done. The next set of content should go back to fitting into weekly or fortnightly releases. If there are any major bugs in this version, I'll get a hotfix out on Tuesday night, but if not, then the next release will be a preview release in a week or so from this post. The next full, public release should then follow on a week or so after that.

Thank you all for your patience.

Unfortunately, the writing for Axel's quest is taking me longer to get finished than I'd hoped, and so this next update isn't quite in a state ready for release just yet. I've pushed what I have to the public github so that you can see that progress is being made, and it shouldn't be too much longer now until I get it all finished.

Sorry once again for how long this Axel quest is taking to get done...

Update (17th): I've pushed what I have to github's dev branch again, and should have the update out tomorrow evening/night. (I just need to get some more bugs fixed and do some testing before releasing it, and I've run out of time tonight.) 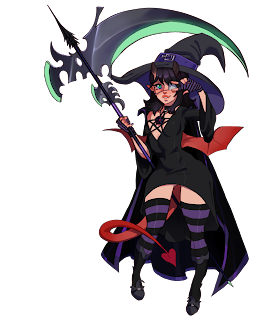 I ended up being a little busier over the Christmas/New Year period than I expected, so I didn't get much time in which to sit down and write content for Axel's quest. Over this weekend I've some of the writing done for it, but there's still a lot of placeholder content left. I'll get the rest of the quest content written over this next week and then do one last public release to finally get Axel's quest all done before going back to the usual preview/public schedule.

Although I didn't get much time to do writing, I was able to grab a few hours here and there in which to get bugs fixed and add a few other small things. (I find that it takes me a while to get into the flow of writing, but I can always jump right in to adding small features and fixing bugs.)

I'd still advise waiting for the next version before playing Axel's quest, which I hope to have out by the end of this week, so I'll see you again then!

The artwork of Meraxis in this post was done by 'FriendlyAlienFriend'. There are also naked/underwear/pregnant variations found within the game (drawn from Meraxis's artwork folders within the res folder), making 12 images in total. You can find FriendlyAlienFriend over on their (NSFW) twitter account here: https://twitter.com/thealienfriend 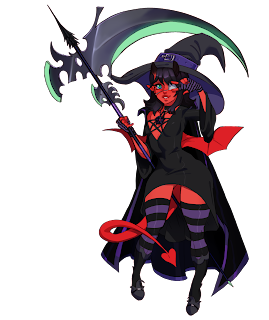