Edit (January 1st): Happy New Year! I ended up being busier than expected over the Christmas period, so the update isn't ready just yet. I'll see if I can get it out within the next few days!

First of all, a thousand apologies for the horrendously-long delay between this version and the last public release. Throughout November I really struggled to get the framework for Axel's quest into a format that I was happy with, and so progress ended up being stalled a lot by that.

Due to the size of his quest (mainly caused by the extra loss routes), I still haven't managed to fill in the placeholder text for it, so I'd advise waiting to do a proper playthrough of the quest until the next release. Speaking of which, I'll try to get an updated public version out by the end of the year, and even if it doesn't end up filling in all of the placeholders, it will definitely be a lot more fleshed out than in this current state.

Anyway, I hope that you find at least some things in this update interesting, and I promise that I'll go back to having a far more frequent release schedule in the new year.

I hope that you all have a very Merry Christmas, and a Happy New Year!

The artwork of Lyssieth in this post was done by 'FriendlyAlienFriend'. There are also naked/underwear/pregnant/futa variations found within the game (drawn from Lyssieth's artwork folders within the res folder), making 16 images in total. You can find FriendlyAlienFriend over on their (NSFW) twitter account here: https://twitter.com/thealienfriend 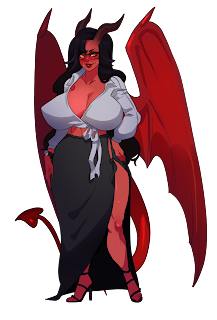 Another push to github

I just wanted to keep you updated and let you know that I've pushed a more stable version of my current progress (v0.3.5.7) to github. While Axel's quest should be playable in it, this version is still quite rough and contains a lot of placeholder text, so I'd advise only building and playing/testing it to get an idea for the sort of content that's going to be added.

Over the next couple of days, I'm going to fix more bugs and replace as much placeholder text with proper dialogue as I can. I'll then build a public-release version (v0.3.5.8) for this Tuesday (24th) and upload it here on the blog along with all the patch notes.

Thank you for your patience, and I'll see you again in a couple of days!

Email ThisBlogThis!Share to TwitterShare to FacebookShare to Pinterest
Labels: 0.3.5.7, progress

Sorry about the length of time since both the last update and blog post. I've almost got this next update ready, and have pushed my current progress to the dev branch of github. I wouldn't advise building it just yet, however, as it's still in a potentially game-breaking state and needs some significant testing and tweaks here and there. I'm going to get that done over the next few days, and should have a more polished public release ready by Monday or Tuesday.