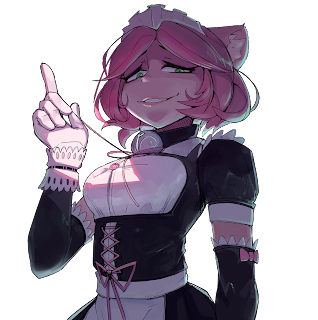 I'm sorry about the delays leading up to this release, and for how long it's taken me to get this preview release ready. I've been feeling a little under the weather recently, and I've been struggling to get as much done as I'm normally able to.

Anyway, I've got a few bugs and other things fixed in this version, as well as adding the framework for the Enforcer Dominion alleyways encounter. That encounter still contains mostly placeholder dialogue (sorry...), but I'll get it all filled in for the full release.

In addition to this, there is a new portrait of Rose in the game, drawn by UltraBondageFairy (https://twitter.com/UltraBondageFae). DSG has also updated a lot of their Enforcer clothing which was added in previous versions, and has additionally made a set of 'kitty lingerie' (consisting of 5 new clothing items).

I'm going to have to spend at least the next few days resting, so taking account of that, I'll try to get the full version of v0.3.9 out on July 15th. I'll make a post to let you know what that will include mid-next week, so I'll see you again then!


I package and release these in-between preview builds for backers over on my SubscribeStar, but anyone can play them at any time by building them directly from the public github (which is always kept up to date with the very latest version): https://github.com/Innoxia/liliths-throne-public/tree/dev
(There's a build tutorial here.)

ALSO IMPORTANT: Make sure you build from 'dev' branch.

I've almost got this preview version ready now, but I just need a little longer to get this Enforcer content finished off. Even if it's not completely ready in time, I'll be releasing v0.3.8.5 on Friday evening/night, no matter what.

Sorry about all of these delays...

I got a little side-tracked by fixing some more bugs and getting some new mod support stuff sorted out, so the Enforcer content still isn't quite ready just yet. I've got 90% of the framework done, which I'll be able to finish off tomorrow, and then I'll get the dialogue written by (hopefully) Wednesday night, so I'll see you then!

I'm going to need a couple more days to get the Enforcer content for v0.3.8.5 finished, so the preview release won't be out tonight. I should have it ready for release by Monday evening, however, so I'll see you again then!

As mentioned in the edit to my previous post, I'm a little behind where I wanted to be right now concerning the Enforcer content, but I should be able to get everything into a state that's suitable for a preview release by the end of this week. I've got quite a lot of bugs and other minor issues addressed already, so even if the Enforcer content isn't as large in scope as some of the other content which I've added recently, this upcoming update will still be a significant step forwards towards getting the game into the sort of state I wanted it to be in for v0.4.

I'm going to get some last minor things finished off tomorrow morning, and then for the next few days I'll focus entirely on getting the Enforcer content finished.

I really do hate not having a fixed deadline to work towards, so even though it might result in disappointment, I'm going to say that the preview will be out this Friday, 19th. Even if it's just to say that I need an extra day or two, I'll be making another post then, so I'll see you again on Friday!

Email ThisBlogThis!Share to TwitterShare to FacebookShare to Pinterest
Labels: 0.3.8.5, progress

Hello again, I just wanted to make this small post to keep you updated as to how things are progressing towards v0.3.8.5.

Over the past week, I've been focusing mainly on fixing bugs, refactoring some of the race code, and adding some other small things. I've mostly finished with all of that now, so on Monday I'll start adding the Enforcer content. I expect that to take me at least a few days to get into the game, and as soon as it's ready, I'll release v0.3.8.5 as a github/SubscribeStar preview update.

I'll edit this post to add another update on how things are progressing on the night of this next Wednesday (10th). I hope to have the Enforcer content mostly done by then, but I'll hold off on giving a specific date for when I expect v0.3.8.5 to be released.

While I'm continuing to work on getting v0.3.8.5 ready for a preview release, I've been having some personal issues to sort out this week, which has somewhat slowed down progress on the Enforcer content. Hopefully I'll have everything sorted out by tomorrow, and then starting Friday I should really be able to get a lot of work done on it, as well as on the Rat Warrens placeholders.

I'll make a new, more detailed post on Monday to fully outline what's been done and what's still left to do. I don't expect v0.3.8.5 to take me too much longer, so I should have a release date to give you in that post.

Thank you once again for all of your feedback and patience!

When it's ready. (Hopefully within a couple of weeks from v0.3.14's release.)