Sorry that this post is so late - I'd got my original citadel framework all ready by Monday, but then decided on Tuesday that I didn't like several aspects of it, so I've been reworking it and trying to get it all ready in time for tonight's github update.

I didn't manage to get everything done (losing to the boss results in a simple 'thrown out' action, instead of the far more involved scenes that will be in the final version), and all of the text is still placeholder. If you decide to build and test this version, I'd advise saving your game first, so that you can reload it and run through the content when it's finished. There is also the strong possibility of bugs in this content, as I've completely run out of time in which to test it.

I really want to get this all finished off before the start of next week's v0.3 work, so it's highly likely that there will be a further github/Patreon preview of 0.2.12.6 released before the weekend is over. It will have all the citadel dialogue added, as well as the finished 'boss fight loss' route that I have planned.

So, for the next few days, please bear with this possibly buggy version (if you choose to build and test it)! It will be updated very soon!

If you do build the game through github, please remember that these are preview releases, and there is a lot of half-finished content (and most likely bugs)!

Hello! This is just a small post to let you all know how progress towards v0.3 is going.

First of all, I just want to point out two large bugs in the current version, and how to get around them:
Attacks not working: There's a bug in how damage is modified when you have the sadist fetish, so if you're encountering this, try removing the sadist fetish via potion.
Imp fortress boss combat not ending: This bug is being caused by setting your difficulty to anything higher than default. Put your difficulty to the lowest setting before starting the imp fortress boss fights.

Both of these bugs will be fixed in the next version, along with a lot of others, but for now, that's how you can get around them.

I've got a lot of bugs fixed and Pull Requests merged into the dev branch of the game over on the LT github, and I'm now working on finishing the citadel content. That should be done by Monday or Tuesday, and I'll then spend another day making sure it's all working properly before releasing the github/Patreon preview of 0.2.12.5. So, that should be out on Wednesday night.

I'll then move on to adding in Lyssieth's content and the Fields map, both of which will be done for the full public release of 0.3, which should be out on the night of the 6th or 7th of December.

First of all, sorry to those of you who were expecting this post yesterday. I wasn't very clear in my wording as to when this hotfix was going to be out, but I meant it as 'any time up to Monday evening'.

Anyway, as I'm sure many of you noticed, version 0.2.11.9 was very buggy. This was due to the companion dialogue for the imp fortresses being a little rushed at the last minute, which introduced a lot of new bugs, while also highlighting several old ones.

While I was definitely expecting some issues with that version, I didn't plan on there being so many bugs, and I had to spend a lot more time getting them fixed than I anticipated. As a result, the citadel content still isn't done. With all of the bugs out of the way, however, I'm now completely free to focus on that over this week, so I guarantee that it will all be finished for the next release.

Additionally, I decided to call this version '0.2.12' instead of '0.3', as I thought that it would make more sense to save v0.3 for when the new area is (finally) added. Sorry it's taking me a little while to get there...

Email ThisBlogThis!Share to TwitterShare to FacebookShare to Pinterest
Labels: 0.2.12, hotfix

So, after I made the previous post saying that the imp fortresses were finished, I realised that I hadn't added all of the companion-specific dialogue for them. Doing that took up the time that I'd allocated for getting the imp citadel & Lyssieth content finished, so both of those are having to be pushed back a little. As a result, I'm going to call this release '0.2.11.9', and I'll put out another public mini-release/hotfix of v0.3 as soon as those parts are finished. That will be ready some time over the weekend.

The reason it took me so long to get all this imp fortress content done is that I decided to rework and expand it all from my original design. If you played the preview version 0.2.11.5, you might have noticed that all three imp fortresses had the exact same dialogue options, and the resulting sex scenes were identical. This has been changed in this version, with each fortress having different ways to bypass combat, sex behaviours, and clothing equips after post-combat-defeat sex. I think that while there's definitely still room for me to come back and add more content to these locations, they're at least a little more interesting that what was originally planned in 0.2.11.5.

As a final note, I'm once again finding myself quite pressed for time, so I haven't managed to thoroughly test the new fortress content. As mentioned above, there will be a public hotfix/mini-release out within the next 6 days, so if you encounter any bugs, please let me know and I'll get them fixed for then!

Hello again! This is just the quick post that I said I'd make to let you all know how progress is going.

I've completed the imp fortresses today, which took a little longer than expected due to some changes and improvements I decided to make at the last minute. I'll move on to finishing the imp citadel content tomorrow, and then on Monday I should have time to write in Lyssieth's dialogue for the next stage of the main quest.

So, with everything still on track to be completed by Tuesday, version 0.3 should be out on the night of the 13th. I'll see you then! ^^

Hello once again! This is just a post to keep you all updated on my progress and plans.

I've got all of the reported bugs in 0.2.11.5 fixed, and have also made good progress towards getting the imp fortresses & Lyssieth's palace finished. For the rest of this week, I'm going to be purely focusing on adding all the dialogue and mechanics for those two areas, and, while I could probably also get the very basics of the Fields map done in time for v0.3, it would almost certainly be very, very limited in content.

Due to this, I've decided to push the Fields area back to v0.3.1, so that I don't end up giving you all a rushed first impression of it (which would most likely include several annoying bugs). As the palace content will take the main story right up to the start of that next area, v0.3.1 will definitely have the Fields in it, so don't worry, it won't be long!

Please expect this next release to be out on the night of Tuesday, 13th. If I have it ready before then, I will release it early, but I'm not sure if that's likely to happen. I'll make another progress report on Friday or Saturday, so see you again then! ^^ 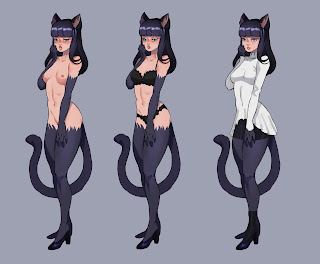 I've got the majority of the fortress framework done, but the imp citadel (the one in the very middle) is going to play a larger role in the main story than I originally planned. For that reason, it's still under construction, but will be finished for v0.3, along with all of the fortress dialogue and Lyssieth's palace.

I've completely run out of time, and so haven't had the chance to thoroughly test this version (outside of the normal testing that I do alongside adding new stuff), so if there are any major bugs/issues, I'll try to get them fixed for a hotfix by weekend's end. Also, please note that the fortress dialogue is placeholder at the moment.

I expect the work on v0.3 to take at least a week, so the full version will be out some time between 9th-13th November. I'll make a more detailed 'targets' post on Monday or Tuesday.

The artwork of Nyan in this post was done by a new artist, 'FriendlyAlienFriend'. The two versions are for a 'cell' style (top), and 'render' style (bottom). One of these styles will be chosen for future artwork commissioned from FriendlyAlienFriend. ^^ You can find them over on their (NSFW) blog here: http://friendlyalienfriends.tumblr.com/ (P.S. This is an additional artist, not a replacement - I will continue commissioning Jam & ChattyNeko.)

If you do build the game through github, please remember that these are preview releases, and there is a lot of half-finished content (and most likely bugs)! 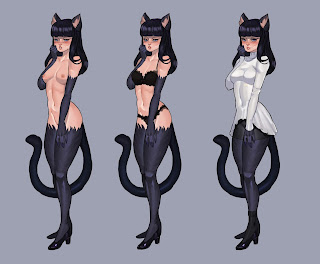