Version 0.2.0 will be released tomorrow evening, but as I still have a few things left to do, it will most likely run over into the early hours of the morning (GMT). If anything major crops up at the last minute, I'll push the release back to the early evening of March 1st. If that happens, I'll make another post before I go to sleep tonight to let you know.

I'll be busy working on finishing off the fluids work tonight, and will then move on to fixing as many bugs as I possibly can in relation to combat and sex. While I should be able to finish most of the stats and combat update, I anticipate that the final balancing tweaks and changes will run over into 0.2.1. :(

As I've been saying for some time now, 0.2.0 will mark the point where I can finally start focusing on adding content, rather than doing any more significant engine work. There are still a few mechanical changes that I need to implement (such as clothing damage, adding proper second penis/cloaca support, etc.), but they're all very small-scale things, and shouldn't take too much time away from content additions. ^^

Update (02:17): I pushed a hotfix to address the import and face/hair modification bugs that were reported.

Sorry again that this update progress was delayed a little, but now that I'm releasing on Wednesdays, I should be able to get a hotfix out for the weekend (if one is needed). ^^

So, anyway, this version mainly adds a few background engine implementations that were needed to get Nyan's quest working (mainly multiple-partner combat, subspecies support -thanks to Tukaima for the foundation of this-, and reading content from .xml files). Nyan's content is 95% complete, but still needs a little bit of polish before it's completely finished (I haven't had time to thoroughly play-test it yet).

There are some big issues with balance in the combat system, but please remember that it isn't completely finished yet! There are also some issues with multiple-partner sex, and some bugs floating around in the sex AI. I am going to get all of this sorted for the full version 0.2.0 release next Wednesday (along with the fluid mechanics - I'm so sorry that this is taking me so long to get done). ^^

The artwork of Brax in this post was done again by Jam. :3 You can find them over on their SFW blog, and their NSFW blog.

They have also done artwork of Bree and Brandi, but it felt like there were too many images to put them all in this post, so here are the links to the image galleries on Jam's blog (I'll embed the images of Bree & Brandi in next Wednesday's post): Brax Bree Brandi

As I mentioned in the previous post, I wanted to move my release date to a Wednesday, so the next update will be on Wednesday 21st February. From that point on, updates will continue to be released on the same weekly schedule as before, but with the release date shifted to Wednesday instead of Friday.

The reasons that I wanted to move the release date to a Wednesday/Thursday (as opposed to the current Friday/Saturday) window are: 1. Each release will be finished & hotfixed in time for you to enjoy it over the full weekend. 2. Any hotfixes will be made on Thursday & Friday, which will give me more time to rest at the weekend. 3. Having my break in the middle of the release cycle will hopefully be less stressful than having it immediately after release.

I did try to get a mini-release finished for yesterday, so that you wouldn't have so long to wait until the next release, but there was (and still is) far too much that's in a half-finished or broken state. If I wasn't moving the release date to a Wednesday, this update would most likely have been delayed by a day or two anyway. :(

My goals for 0.2.0 are mainly just to finish off all the multiple-partner sex and combat mechanics that I've been working on for the last few versions. I want to get the game as bug-free as possible for this next version, as it's going to be the one which marks the end of major engine work. I'm also going to get Nyan's content added, as well as the final fluid mechanics. ^^

I also want to try moving my release day from Friday to a looser Wednesday/Thursday window, as lately I've been finding that the release times have been rolling over into the weekend, leaving me with almost no time for a rest. This means that the updates for 0.1.99.5 and 0.2.0 will be pushed to the 21st and 28th, respectively. I feel as though having a release date in the middle of the week will be a lot less stressful, and will give me time to push out a hotfix for Friday, if one is needed, instead of having to work over the weekend to get one done.

I can't make any promises that there will be a release this Wednesday/Thursday (i.e. tomorrow or the day after), but I will see what I can do. ^^ 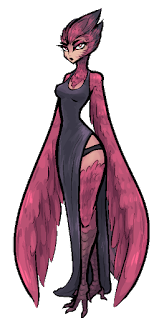 I'm sorry about the delay this week, but some significant bugs cropped up late on Wednesday evening, and it took me until today to get them fully sorted out. As a result of this, I lost all of the time I'd set aside for getting both the fluids and Nyan's content into the code. I really am sorry that this hasn't been added yet, but this week really was quite a hard one. ;_;

That being said, the bulk of the stats rework is all done now (although I do still need to finish integrating it properly into combat), so the final things I have left to do engine-wise are adding multiple combatants and reworking the attacks & spells for combat. This will all be done for 0.2.0 (along with Nyan's content), at which point I'll finally be able to stop making huge changes to the engine, and focus instead on polishing existing mechanics and *adding content*! ^^

This release is in a rather rough state. You are likely to run into quite a few instances of unfinished mechanics, and for that I really do apologise. I considered pushing this release back another week to get it all finished, but I know that would have been extremely disappointing, so I opted to release this as-is, and warn you here that it's in a rough state. :(

The artwork of Dianna (the dominant harpy matriarch from the quest 'Angry harpies') in this post was done again by Jam. ^^ You can find them over on their SFW blog, and their NSFW blog.

This is still an early alpha, and will most likely contain bugs and half-finished content!

.exe version (Please use this if you are on Windows and have not installed/updated java!): 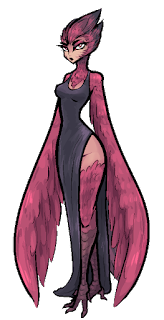 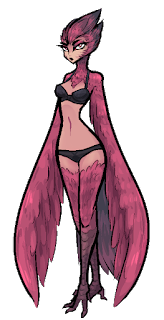 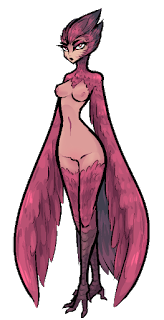 P.S. I'm going to be sleeping through most of the day tomorrow, so I'll catch up with bug reports & comments late in the evening & on Monday morning. ^^

I'm sorry about this, but I'm going to have to push tomorrow's release back by one day. The combat and stats rework ended up causing several large unforeseen issues with the UI, and it's taken me an entire day to get it all fixed. As a result, I need an extra day to get everything into a playable state. :(

Email ThisBlogThis!Share to TwitterShare to FacebookShare to Pinterest
Labels: 0.1.99, delay

Sorry that this post is a day late again... I keep on forgetting to make it on Monday. :s

Anyway, what I'm working on this week is mainly finishing off the stuff from last week. That means that I need to get the AI in sex to actually take their preferences into consideration, fix the final bugs in multiple-partner sex, and add in fluid stuff. ^^

Once that's done, I'll move on to the combat rework and Nyan writing. This work may run over into the next version (0.2.0), but I will get as much done as I possibly can! :3

- Fix the multiple-partner sex scene bugs and improve the AI. - Add in missing content related to addictive/psychoactive/alcoholic fluids. - Implement combat & stats improvements. - Add quest & content for Nyan (which was the winner of a poll I did on Patreon). - Fix as many bugs as possible. 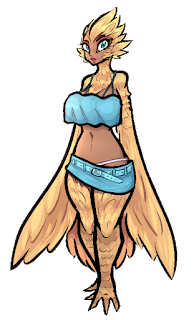 Here's my current progress towards version 0.1.99! I still have a lot left to do, but I've managed to get all the final mechanics for lust implemented into the engine. This was a little more involved that I originally anticipated, as I had to revamp the fetish system a little in order to add in 'desire' levels for each fetish.

I still have some bugs to iron out in the multiple-partner sex, but now that all the mechanics are finally finished (apart from making stamina drains have an effect), that won't take me long to finish. ^^

If you're building from github to test this out, please be aware that there are most likely going to be some bugs in this version. Please remember that this is just a preview of my current progress, and it will be in a much cleaner state for the full release next Friday! :3

Important github info: I updated my Java to 9.0.4, so if you're building the game from github, you may need to update your Java to that version too (although it might still work with older versions). If you are building it in eclipse using Java 9, please be aware that you'll need to export as a 'JAR file', *not* a 'Runnable JAR file'. For some reason eclipse is having trouble exporting runnable jars with Java 9. When exporting as just a 'JAR file', make sure you select LilithsThrone as the source file, then keep clicking next until you get to the part where it says 'Select the class of the application entry point:'. It's very important that you choose the 'Main' class in this box, as otherwise the exported JAR will not run. ^^

The artwork of Brittany (the bimbo harpy matriarch from the quest 'Angry harpies') in this post was done again by Jam. :3 You can find them over on their SFW blog, and their NSFW blog. 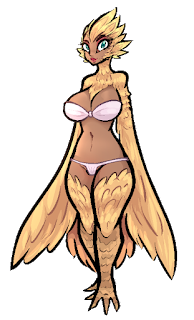 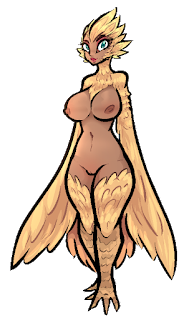 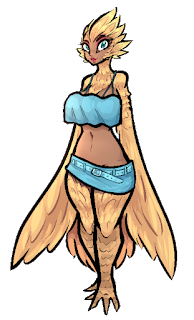 Update (Sunday, 18:05 GMT):I've updated the github with a fix for the game-breaking bug with Vicky's sex scene. I think that this was the only major bug, so the next update will now be next Friday. :3

When it's ready. (Hopefully within a couple of weeks from v0.3.14's release.)